The first business college in the western United States, Heald College is nearly 150 years old. Founded in San Francisco, California, Heald’s mission was, and continues to be, to prepare students for business careers by providing them with career education that focused on practical, hands-on learning. As the needs of the workplace changed, the Heald College curriculum evolved from business courses to include technology, healthcare and legal degrees. It now has 15 locations and 2,500 employees throughout California, Oregon, and Hawaii.

Through its long history and its expansion to three states, Heald never had an “owner” or “manager” of its telecom environment. As the IT team looked for a telecom business partner, they were focused on gaining assistance with design and procurement, and finding more reliable technical support than they could get from the carriers. They also hoped to achieve bill consolidation as well as inventory tracking and reporting tools through a cloud-based software portal. Achieving cost savings was important as well.

Prior to vCom, Heald was managing a telecom environment that stretched across multiple locations, various technology products and numerous carriers. It received and processed over 100 invoices each month. It had no documentation or verification for current services, and no centralized view of its telecom spend,
inventory or activities. Heald particularly struggled to assign telecom costs back to its different business units. And the team knew the growth they were planning would add complexity to the situation.

vCom began by auditing every carrier, every invoice and every line for Heald. Through this process, vCom standardized the requirements and replaced and optimized the services. Services such as ISDN, DSL, PRI and analog that were no longer being used, but were being paid for, were terminated. This resulted in an annual savings of $100,000.

Heald’s team at vCom named all of the telecom inventory within the vManager SaaS platform, assigning inventory to locations and cost centers, and customizing invoice allocations by cost center. Several customized AP reports were created to give Heald visibility into detailed cost breakdowns, and to help them catch overages before they got out of hand. 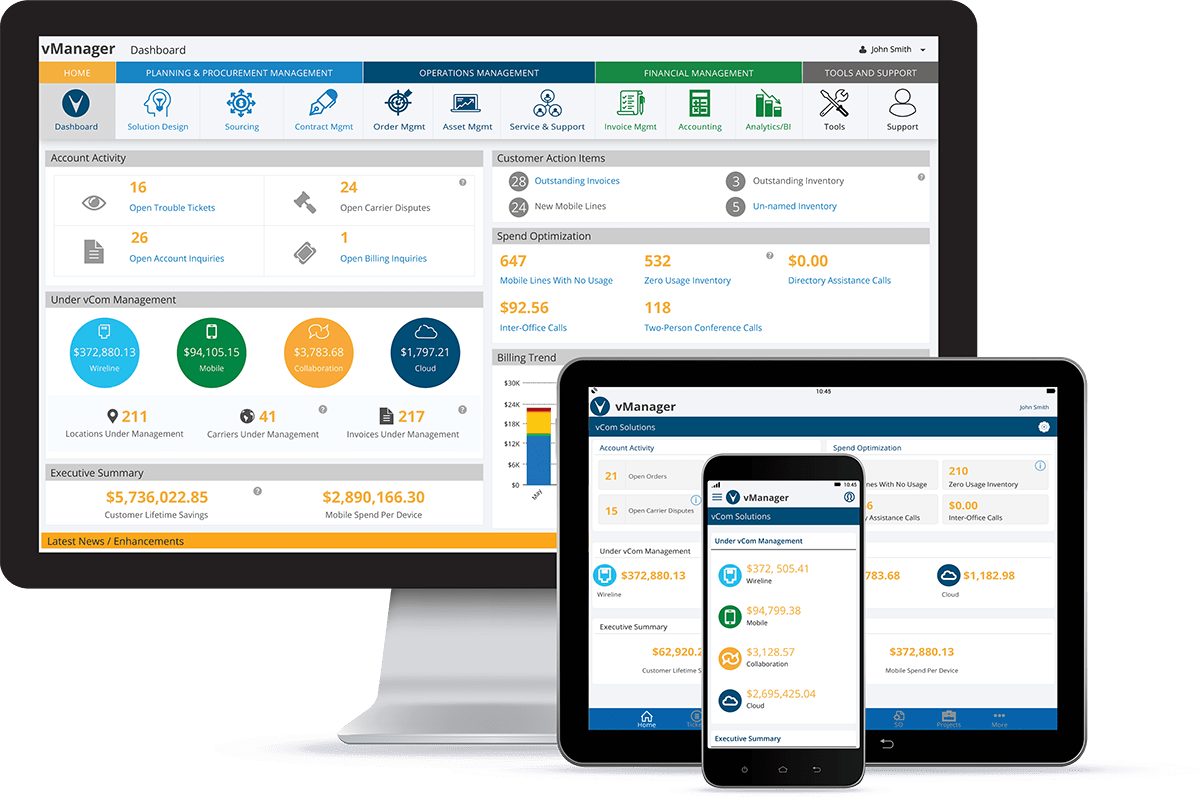 As a result of these efforts, Heald saved approximately 30% of its annual telecom spend for current services – an annual savings of $300,000. Monthly invoices were reduced from 100 to 1.

Heald’s telecom administrator, Jackie Emerson, has become a power user of the vManager software, and has driven many enhancements to the software through her suggestions. She has spoken at the vManager user group advising others on how to use all of the capabilities of vManager to help streamline their processes. For example, by moving their wireless inventory and billing into vManager, Jackie saved the company 8 hours of overtime they had been spending each month to code wireless invoices for accounting.

Due to their use of vManager, in addition to the cost savings, Heald’s team has gained increased visibility into its telecom environment, as well as the confidence that what is paid for is being used. They are able to budget more accurately, and perhaps most importantly, they have freed up resources to focus on other pressing projects.

vCom has proven themselves to be a valuable partner to Heald College. They have proven most valuable in the area of identifying savings, consolidating billing, and acting as our partner when working to resolve issues with the large carriers.- Jackie Emerson, Senior Telecom Administrator

Learn more about what you can do with vManager